0
0
0
0
I got back from my trip to Colorado yesterday and have finally  caught up with enough work to sit down and blog.  I had a great trip but today I’m thankful for yoga pants because I’m officially a giant fat ass.
My trip to Denver was exactly what I had anticipated–beer, taprooms, and an awesome wedding weekend with friends!  Since photos don’t have calories and because I’m lacking in brain cells at the moment, I’m sharing my stomach contents from the weekend through iPhone photos.
** WARNING: FOOD AND BEER PORN AHEAD **
I arrived in Denver on Friday afternoon and headed over to Church of Cupcakes, a cupcake shop on Colfax that I’d heard a lot about.  I promptly ordered this amazing Salted Caramel Cupcake.  I was wiping drool as I took this pic, took one bite and then annihilated the rest of it in a second.  I’m too ashamed to post the pic of me with the entire thing in my mouth.  Just kidding, I have no shame.

See, I really did eat it in two bites. 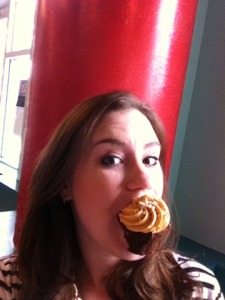 After demolishing a cupcake and some dignity, I headed over to Wynkoop Brewing Company for some beer and savory grub. I stepped over some of Denver’s nastiest puddles to get this pic of this cool beer vat/fermenter/distillation column (seriously, what’s the word for this thing?) in an alley. 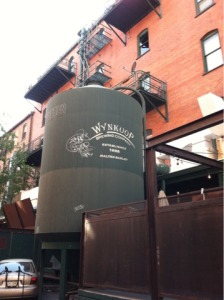 I like ordering local fare when traveling so I gobbled down some buffalo meatloaf perched a top a mountain of mashed potatoes, covered in a red wine demi glace and topped with bacon. OMG yum!  I had no idea why those green things were on the plate. 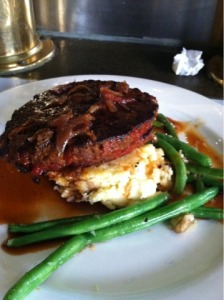 I ordered a flight of 3 beers for $3.50–that’s almost free! I debated getting the beer that’s flavored with roasted bull testicles (no joke) but decided on the Belgorado, Mile HIPA, and Colorojo. 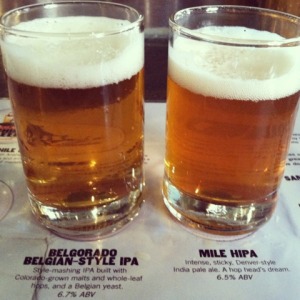 The next day I had brunch with my old college roommate–yay, the memories!–and dragged her ass around Denver in search of Denver Beer Company.  She claimed she didn’t mind walking the 1.3 miles to watch me drink beer even though she had been up since 6am to catch a flight in.  That’s a good friend. 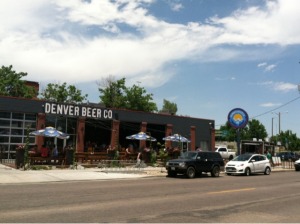 The Denver Beer Company was awesome, even more so because they allowed dogs in the bar.  Dogs, in a bar! How awesome is that?  They also had board games but I was too busy drinking and petting random pooches. 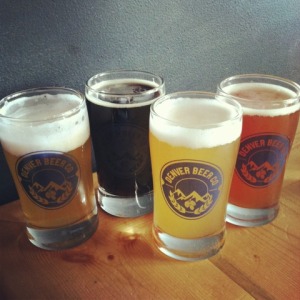 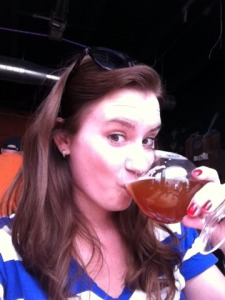 Then I took a nap, showered, and got ready for the wedding–woohoo!  I used a hair tutorial from The Small Things Blog with some tweaks of my own and my I was set.  I got several compliments on my hair so it must have looked like it took more than 10 minutes to do.  Fooled ya, suckas! 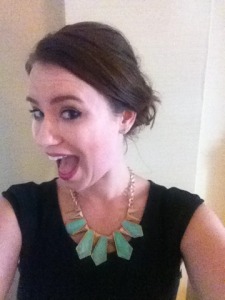 The bride asked me to do a reading at the wedding, which I was honored to do.  I managed not to trip up the stairs to the microphone and deliver my reading almost flawlessly.  Go me, go marriage, yay love! 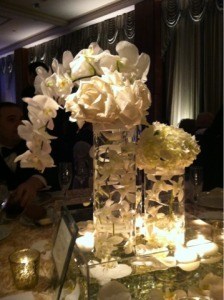 To amp up the fun, there was a photo booth with ski props.  Since the last time I’d been to Colorado, I came home with a torn ACL, I thought it only fitting that I show those badass mountains who’s boss and go skiing in the spring, in an evening dress and heels.  Take that, mountains! 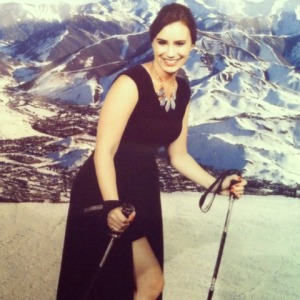 All good things must come to an end and so did the wedding and the weekend…but not the beer.  I managed to imbibe some more local brews at the Denver airport.  First Boulder Beer with breakfast–go ahead and judge! 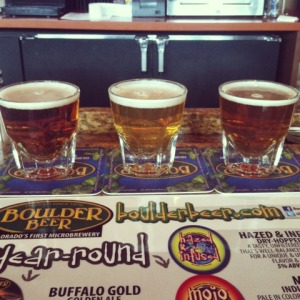 Then I found an Odell Myrcenary Double IPA to top off the weekend.  It was so good that I almost missed my flight.  For real. 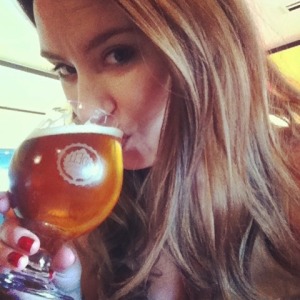 And now I’m back in NJ, pretending that I didn’t gain 10 pounds in Colorado and that my jeans still fit!  I’ll be eating salads for the next year…or until I can start running again.
How was your weekend?

5 thoughts on “weekend wrapup: delicious denver and a wedding”