This year I spent New Year’s Eve doing something that wasn’t going to leave me hungover in the morning. Instead of wrapping myself in cleavage-bearing sequins, overpaying for a cover at a nightclub, and throwing elbows through a crowd to get a drink, I rang in the New Year on my yoga mat.

Ok, so I was lying about not showing any cleavage (thanks, Lululemon). But this year, like last year, I counted down to midnight calm and relaxed…at a yoga studio. I attended the New Year’s Eve Yoga Party at South Boston Yoga. The 10pm to midnight party is taught by David Vendetti and Todd Skoglund, the co-owners of South Boston Yoga, and for the past two years, has been my chosen way of celebrating New Year’s Eve.

According to David, the legend of the New Year’s Even Yoga Party started around 10 years ago when he was teaching at Back Bay Yoga. Long before he was named as the Best of Boston yoga instructor, Vendetti pitched the yoga party idea to BBY founder Lynne Begier. As many geniuses often hear, Begier reportedly told Vendetti that he was crazy, but to go for it. And he did. Vendetti hosted the first of his New Year’s Eve Yoga parties that year and the fun hasn’t stopped since.

Aside from the obvious answer, “Why not?” New Year’s Eve yoga is a great alternative to other parties. New Year’s Eve can be a difficult night. For those seeking to start or continue living a healthy holistic lifestyle, a party of heavy drinking and food isn’t the right fit. For those in recovery, a night of debauchery with drunk friends can be wrought with discomfort and temptation. For those seeking to forget and move on from the previous year, or simply have a low-key night, movies and pizza at home is decidedly anticlimactic.

New Year’s Eve Yoga is the perfect alternative to going out in the typical New Year’s fashion. Since Vendetti’s inception of it in Boston, other local studios have caught onto the idea, including North End Yoga and JP Centre Yoga. But Boston isn’t alone in these parties – from New York to Philadelphia to Denver, yogis around the country are celebrating New Year’s Eve in savasana.

What about South Boston Yoga? 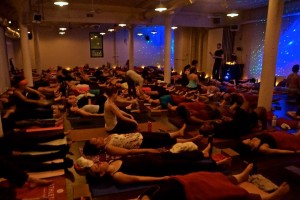 In short, Vendetti’s class is amazing. I’ve taken his class only twice – once last New Year’s Eve (photo at right) and then again this year. I cannot speak to his regular classes, but I have no doubt that they’re equally amazing.

Vendetti’s love of teaching and helping others shines through in his instruction. But his sense of humor – a must in yoga practice – and killer playlist make the New Year’s Yoga Party fabulous. From his telling of the Legend of New Year’s Yoga Party (that may or may not be 100% true) and the disco ball (it is a party, after all) to rising out of savasana with gentle group singing accompanied by his miniature piano, Vendetti’s class is unforgettable. And for just $30 ($35 at the door), New Year’s Eve at South Boston Yoga is one Boston’s least expensive New Year’s Eve parties around.

This was my second year at Vendetti’s New Year’s Yoga class and the one-year anniversary of my love of yoga. Coincidence? I think not.

What started as an alternative New Year’s Eve idea thrown out by a friend, turned into one of the best decisions in my life. For real. In case you’re wondering, the other best decisions I ever made were to file for divorce, move to Boston, stop dying my hair, and change my career. That’s how much yoga has changed me, but I digress…

Although awesome, it wasn’t Vendetti’s class so much as my decision to do something different for New Year’s Eve, that made New Year’s Yoga such a great event in my life. Two hours of yoga at the end of 2013 spurred a year of personal growth and development for me. When the clock struck midnight on January 1, 2014, I had already accomplished something in the new year. How many other New Year’s Eve celebrations can provide that?

I woke up that morning well rested and calm. Two days later I was sore but happy. So I tried another class, this time at Back Bay Yoga, then another and another. I quit the florescent lit meat market of a gym and joined a yoga studio. A self-described balls-to-the-wall type of person, I accepted the label of yogi, and resigned myself to being the butt of patchouli jokes from friends.

What I found in yoga was much more than I had envisioned. My days and weeks, and later my body and mind, were shaped by hour and a half sweat sessions of strength and power. I learned to bring mindfulness not only to my mat, but also to my life and relationships. Yoga brought a self awareness that I didn’t think possible. I guess that’s what happens when you have to remind yourself to breathe.

And so it seemed natural to celebrate the end of 2014 the way it began, alone on the mat, ready to begin a new year with clarity. Happy New Year and Namaste.