September 3rd through the 5th was the MS Challenge Walk on Cape Cod. I posted earlier about my foolproof training plan. Despite being a self-described expert, I was nervous in the days leading up to the walk–50 miles is no joke!

The walk was from Friday to Sunday and the weather for the last two days was forecasted to be rainy. Naturally, I freaked out and on Wednesday night I ran around town spending $100 on a poncho, extra socks, and enough body glide to cover a sumo wrestling team.
We were starting early on Friday morning so The Bean Team (i.e. me, Kate, Captain Jodi, and her sister-in-law) headed down to Cape Cod on Thursday evening. We prepped for the walk with a carb-loading dinner at the ever-fancy Olive Garden. Something I deeply regretted the next day… but anyway. I had almost reached my fundraising goal and was determined to meet it that night. In a last ditch effort I turned to Twitter and did some crazy stuff–but I’ll leave that for another post on how to fundraise like a lunatic.

On Friday morning we woke up at what felt like the butt crack of dawn and got dressed. The rest of the Bean Team–Jodi’s sister-in-law, cousin and cousin’s sister, assembled at the starting area. There were Opening Ceremonies from the MS Society of Greater New England and some calisthenics to get the blood moving. It was a hot day and we were sweating before the walk even started. 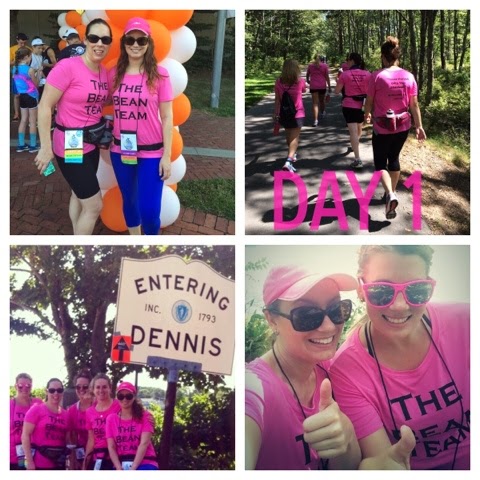 We walked from Hyannis through the town of Dennis. The view and excited chatter helped time pass. 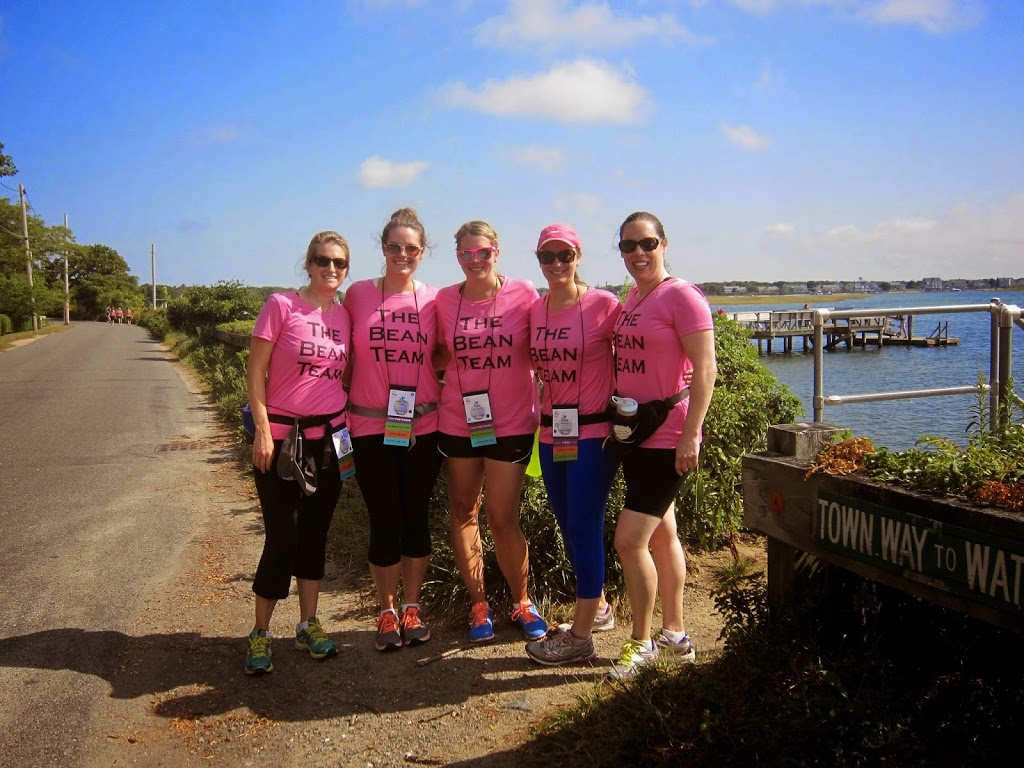 It was hot but there were rest stops every 2-4 miles with plenty of water, Gatorade, and snacks. The crew was amazing and supportive, cheering us all on.  I was so impressed with the amount of thought and planning that went into this event. We wanted for nothing, except for someone to carry us. 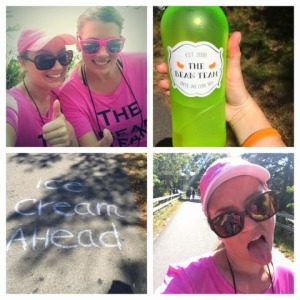 After 11 miles we stopped for lunch and continued the walk along the Cape Cod Rail Trail to Brewster. The shade from the trees was a welcome relief to our sweaty bodies and swollen fingers. 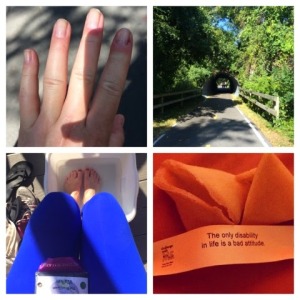 Upon reaching Brewster, we were greeted with cheers and ice baths and massages. We ended the night gorging on dinner and watching a slide show of pictures that had been taken during the day. 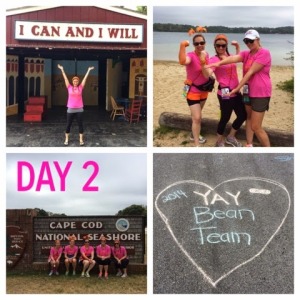 The next morning we somehow found ourselves up and ready to go at 7am. This was no doubt assisted by a truck driving through the camp blasting music and honking its horn at 5:45am. It was “orange day” as orange is the color of MS, so we donned our orange and pink shirts and the orange MS buffs that we got when we checked in and headed out for the walk.

By the middle of the second day, we were tired and blistered–oh so blistered! I resorted to eating candy, something I rarely do, but it served as a distraction from my sneakers, which were quickly filling up with fluid from popping blisters. At some point I started running because my hip flexors were revolting and it was the only way to give the muscles a break. I never would have thought that I would prefer running to walking, but after 35 miles, you get desperate. I like to think that if the devil himself stopped by offering piggy back rides that I would have declined, but truthfully, I’d probably sell my soul if there was a foot rub thrown in.
The second day wrapped up with stories about MS research from leading physicians in the field and a beautiful candlelit ceremony where we honored the people we were walking for, the ones with MS. We saw, through a progressive lighting ceremony, how everyone at the walk had been impacted by this horrible disease–patients, spouses, parents, siblings, grandparents, aunts/uncles/cousins, and friends. We were all there for someone. Had my body had any more salt to lose I would have broken down crying so I resorted to a group hug as we swayed to a sappy Josh Groban song.
Great, I’m crying listening to it now.  My badass persona is officially blown.

We met Day 3 with elation–surprising considering that out of the 6 of six, not one could walk without looking like she had a large stick up her butt. We had 10 miles to go! We were going to do it and cross the Finish Line together! Woohoo! We even had the energy to do a jumping picture, which I realized that I’m insanely good at. Why I haven’t been doing these my entire life I have no idea, but have vowed to rectify that immediately.

Our motivation somehow lasted and kept us in a good mood for all 10 miles. Come to think of it, we were in good moods for the entirety of the Walk. It was an amazing experience to walk 50 miles with 5 other women, 3 of whom I had just met. We supported each other through the muscle cramps and blisters. We sang together to the Backstreet Boys Pandora station until our iPhones died. And we walked in silent admiration as we passed other walkers persevering through the effects of their MS assisted by walking sticks, canes, and wheelchairs. 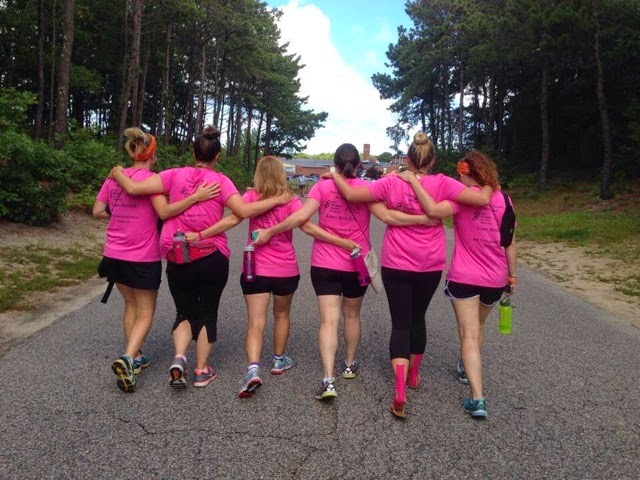