A recent text message conversation had me thinking about dating in a time of social media. Particularly how strange and telling, yet remarkably organic, it is.  If you’re like me and you’re a self-proclaimed social media guru, chances that you’re going to date someone and NOT stalk the ever loving crap out of them on social media is slim to none.  Facebook pictures of college exes that make your stomach turn are nothing.  I’m talking about how after a couple of cocktails you both realize you’re on Twitter and Instagram and make the bold and possibly regrettable move of following each other and delving into the mind of someone who you barely know.  And any fantasy you ever had of this other person is gone forever.

What sounded like fun while you’re trying to network or make new friends or get more followers will morph into a wrath of agonizing insecurity and self doubt.  Do I post too many selfies?  Why was he liking all of my selfies late at night?  That’s kind of creepy.  I bet he’s wondering what my butt looks like naked with all of the burger pics I post.  Man I post a lot of burger pics.  Mmm, burgers… Why can’t I keep my food offline?  Control yourself woman! Speaking of which, he hasn’t answered my texts all night.  Is he on a date? He just ‘grammed chocolate cake for TWO at the hottest new restaurant in town. Who’s that girl who liked his pic in 30 seconds?  Oh crap, that’s me–UNLIKE, UNLIKE! 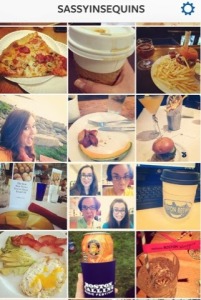 You’re no longer mysteriously sexy (attributable to the burgers pics you post) and any veil of anonymity is completely gone.  He’s knows you’re not out tearing up the town.  You blew your cover showing off your yoga pants and free wine that you got in the mail. 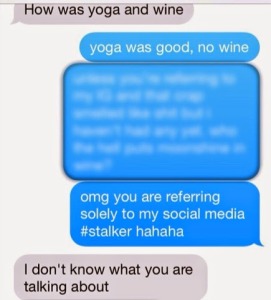 But that’s ok, because chances are he’s just as bad as you.  You’ll find that poem posted 63 weeks ago that would be better off as lyrics to a Goo Goo Dolls song written on a bathroom stall at a rest stop in Ohio in 1998.  The cleverly crafted tweet posted 6 days too late.  The Zorro Halloween costume taken a LITTLE too seriously.  Or the cat memes.  So many cat memes. OMG, did you really go out with a man who posts cat memes?!

It’s a strange world we live in and even stranger to date in.  That’s love in the time of Instagram.