Recently I found myself on a trip to Los Angeles thanks to a professional obligation and some personal stuff. Since it was a long weekend on account of Martin Luther King Day, I made the most of having to be out in the sunny California weather for business and got myself there Thursday night to front-load my weekend with fun.

Due to a set of strange but appropriate-for-me circumstances, involving a non-lethal stabbing and health-related family obligations, I’ve found myself in a long distance relationship with a man who is currently living in Santa Monica. This seemingly frustrating situation works out surprisingly well for two people who haven’t done the whole relationship thing in a while and who are secretly trying not to freak out about liking someone while contemporaneously really liking each other. Ain’t love grand?

Anyway, my time in Los Angeles was nice reprieve from the cold Boston weather and looking back from the snow covered tundra called Boston, a huge tease. I spent the weekend doing everything that is physically impossible to do in Boston during the winter, which mostly meant eating without wearing a sweater and three pairs of socks and being outside. Here is my food journey through La La Land.

“People who love to eat are always the best people.” 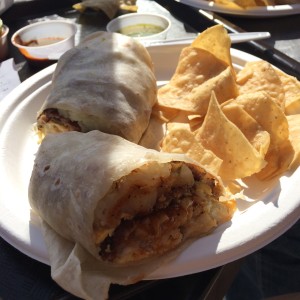 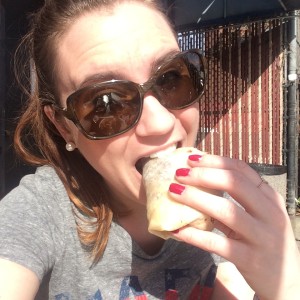 BRICK + MORTAR – We found ourselves at Brick & Mortar on a Saturday in Santa Monica. It was the perfect spot for brunch and people watching. The restaurant offers bottomless mimosas and a Bloody Mary bar stocked with more toppings than you can fit into your glass. The mimosas hit the spot and quelled any insecurity I was feeling being the only non-dolled up woman in the joint. Santa Monica is a breezy fun beach town but I had underestimated the LA vibe that would be present. 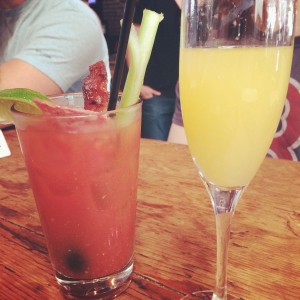 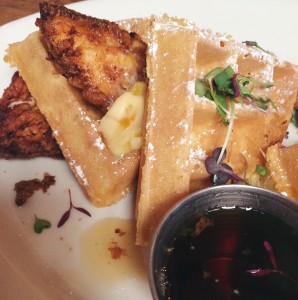 In the crowd of fedora-wearing tan people, I chowed down on the egg sandwich on a pretzel croissant. It was huge. Like, can’t eat this all, why didn’t we split something, huge. However, I like to think I was doing my part for the carbohydrate food group, as it was getting little love from the other tipsy brunchers. While the couple next to us split a bowl of fruit, my man friend ordered the chicken and waffles – this is why we get along so well. 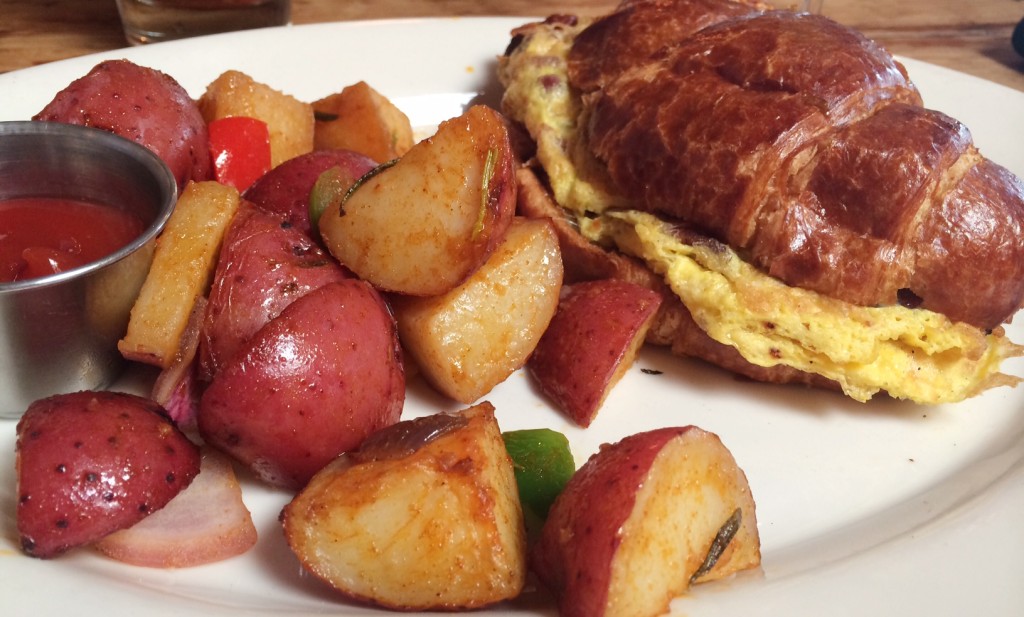 AROMA COFFEE & TEA – In the true “do it all” spirit of my trip to LA, we ventured out to the Valley where we brunched at Aroma Coffee & Tea. The line was out the door when we arrived, provided some quality time for me to chat with his mother and brother who had joined us for brunch (wait, whaaaat? spoiler: it was great). Aroma is in an old house set on a cute street in the Tujunga Village area of Studio City.

My huevos rancheros were amazing, and once again, too much food. I’m starting to think that chefs in LA get excited when someone orders carbs and pile enough food to feed 5 people. I subbed garlic fries for the breakfast potatoes which was probably the best decision of the day. There were plenty to share, which made me happy that I wasn’t the only one keeping the vampires away with my breath. I wasn’t brazen enough to take a picture of my food in front of the boyfriend’s family – they can find out later how weird I am.

IN-N-OUT – The first thing I did upon arriving in the land of fame excess was to get my greasy carb loving self to In-N-Out. Apparently I’m not alone, as the In-N-Out closest to LAX was packed, but the drive through went faster than expected. 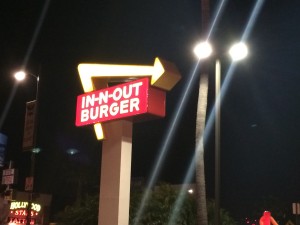 It had been over a year since my last experience and I could not have been more excited. I opted for a cheeseburger, animal style, with fries, secretly eyeing my bearded companion’s Double Double. It took massive amounts of self control to actually take the picture of the food before devouring the greasy goodness in 2 minutes flat. 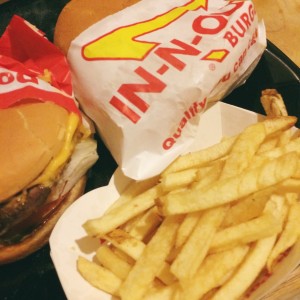 THE CHURCH KEY – Hailed as West Hollywood’s best new date spot and featured on this season’s Best New Restaurant, The Church Key did not disappoint. The American Dim Sum style restaurant nailed it with both cocktails and food. We sipped on the Yoda’s Staff and Fashioned Chai, which was recommended by the server. 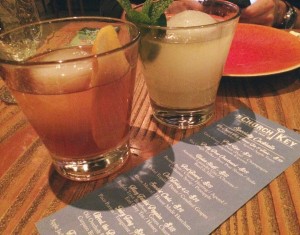 A chronic sufferer of cocktail indecision, I’m was appreciative of the help – it was a toss up between the Chai and the Alfred, the Butler. My favorite dishes were the Mediterranean style Ahi Tuna Tartar (with pomegranate arils, Greek yogurt, and pistachios) and the Angus Beef “Shabu Shabu”. We also got the Crispy Pork Belly, which was good, but not something I’d order again. Pork belly is one of those things that I want to love but can’t – it’s just too fatty for me. 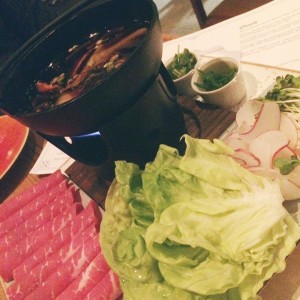 HIGH ROOFTOP LOUNGE – On a beautifully clear night we found ourselves at the High Rooftop Lounge at the Erwin Hotel in Venice Beach at sunset. It’s the only rooftop lounge in Venice Beach, making it a prime spot for both people and sunset watching. 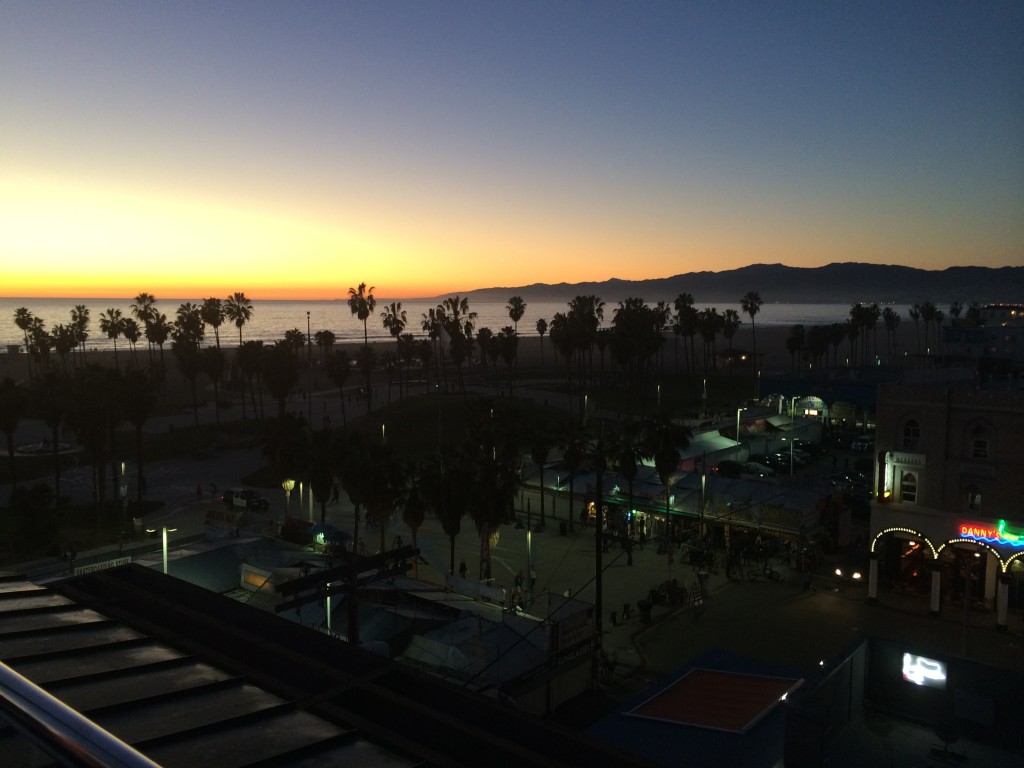 EVELEIGH – We checked out Eveleigh, a restaurant and bar in a residence sitting on an orchard in Los Angeles. Totally normal. It was packed, as it was a Friday night, but we managed to squeeze in at the bar on the outdoor patio to grab some drinks. Both the front and back of the restaurant have outdoor patios that, despite having ample seating, have an intimate feel. 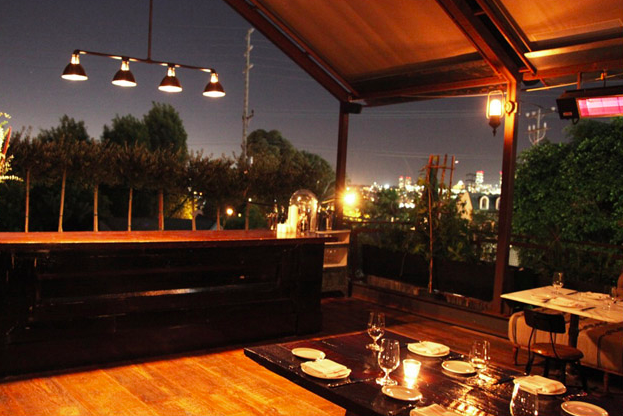 AREAL – On the same day that we brunched at Brick + Mortar, we also went to Areal for an evening cocktail before heading out for the night. Areal was yet another California restaurant and bar with ridiculously inviting outdoor seating that made me cringe at the thought of going back to snow-covered Boston. When we got there the temperatures had dropped to a “frigid” 50something so we imbibed at the bar. My drink was great, a whisky one, and kept warm in the low temps (ha, ha, haha). 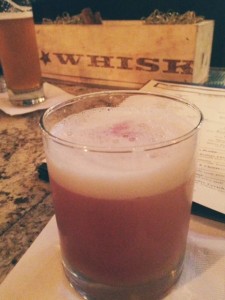 GOLDEN ROAD BREWERY – No trip of mine is complete without beer and my trip to LA was no exception. I took the opportunity to maximize my time in LA by inviting friends I wanted to see to the brewery. Both friends have adorable pugs and thanks to Golden Road Brewery’s outdoor area, I was able to enjoy beer while playing with dogs – it doesn’t get better than that! We got two flights, one regular, one IPA, which were yummy and will be reviewed in another post.

The best thing about Golden Road Brewery was the outdoor dog-friendly area. The area is large, spanning the front of the Brewery and Pub and wrapping around on one side. It’s covered on top to protect beer drinkers from the sun – a must in LA. Both the beer and the company made it a great visit. 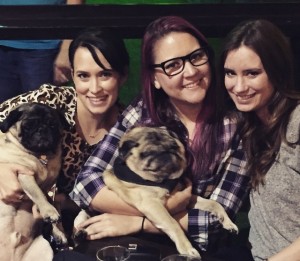 With only 4 days in the Los Angeles area, I ate and drank more than most do in a week. This was by no means a complete food tour of LA and only left me wanting more. I have no doubt that I’ll be back in the Spring to continue stuffing my face in front of the pretty people California. In the meantime, I will be dreaming of patio dining, while eating chili and enduring the long Boston winter.