One of my favorite things about summer, other than having an excuse to eat ice cream, is summer concerts. There’s nothing better than relaxing outside in nice weather listening to live music. I’m lucky that I’m dating someone who also loves live music and was able to take full advantage of summer concerts with him. This summer we attended 8 concerts and still have one more to go. Here’s the wrap up.

The summer concert series started out cold and wet in May at Country 102.5’s Street Party outside of the House of Blues by Fenway Park. The weather was iffy from the get go but we decided to chance it and meet up with my friend Kate to enjoy some country music. Caitlin joined us on the crowded Landsdowne Street and we all managed to enjoy a few songs just before the skies opened up and Kate and Caitlin took their party to Eastern Standard. 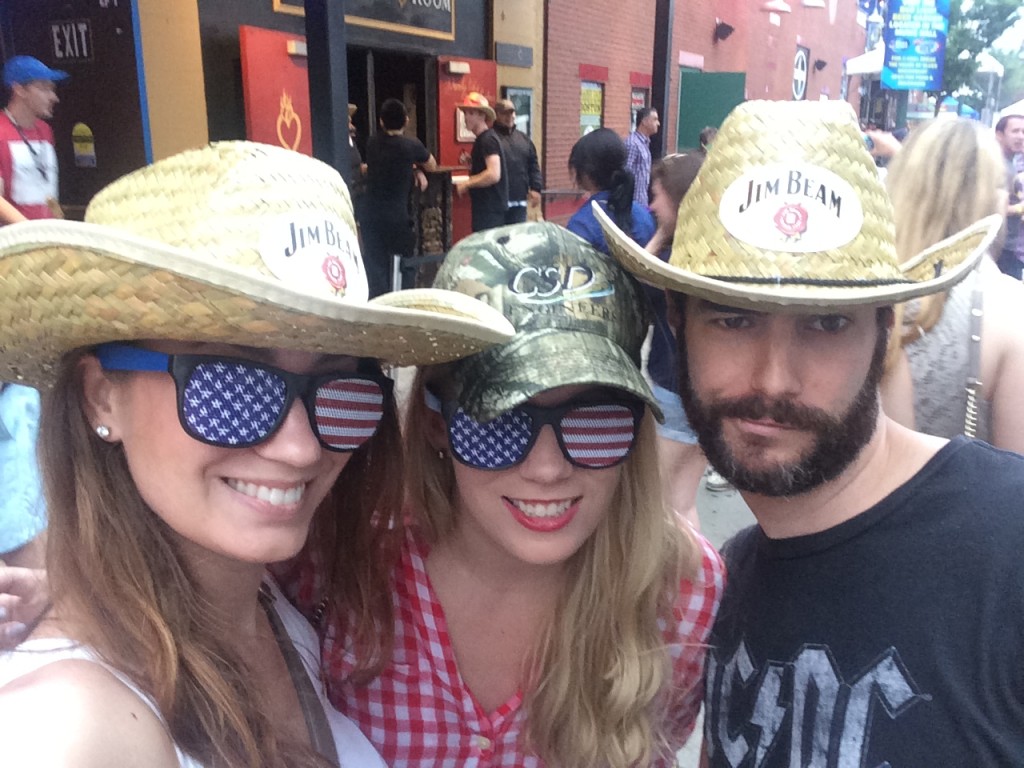 My boyfriend and I decided to make the most of the day and, with the help of some gut-warming beverages, enjoyed singing and dancing in the rain. I was happy that I had brought along my trusty rain jacket and camo hat to complete my country concert hillbilly look.

A stark contrast to country, we attended the AWOLNATION show inside the House of Blues in June. My Electronica for Studying Pandora station first introduced me to the band over the winter, so I was super happy to  learn that my boyfriend was also a fan and even happier to get the chance to see them live in Boston. 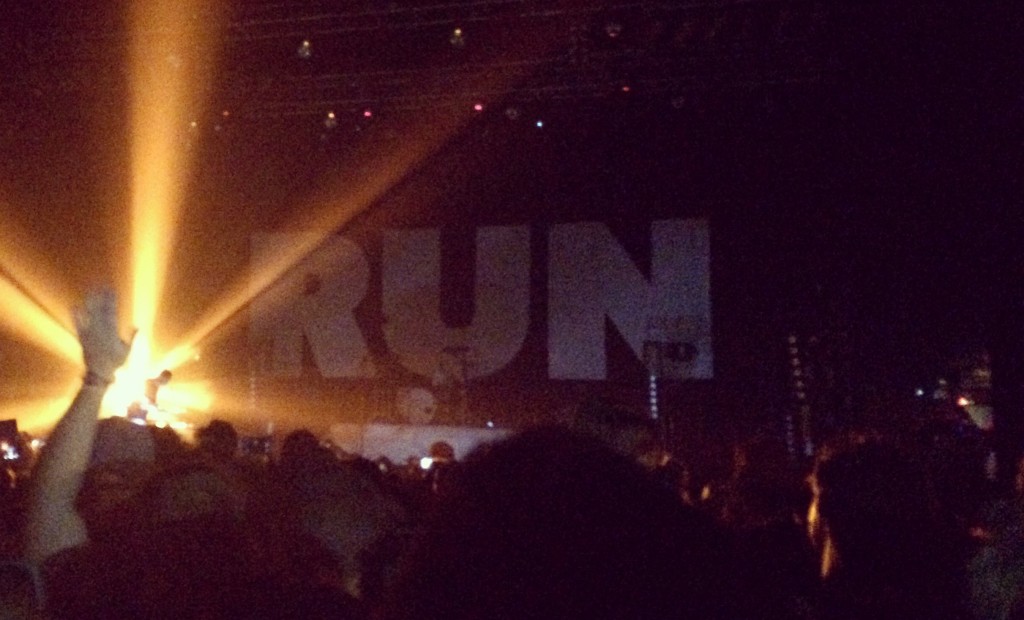 Not fans of being grown ups, we dressed in our Millennial concert finest—cutoffs, jeans, graphic tees, and Converse sneakers. The show was great, with opening acts from Parade of Lights and Family of the Year. I was previously unfamiliar with both bands but have since downloaded some of the tunes. 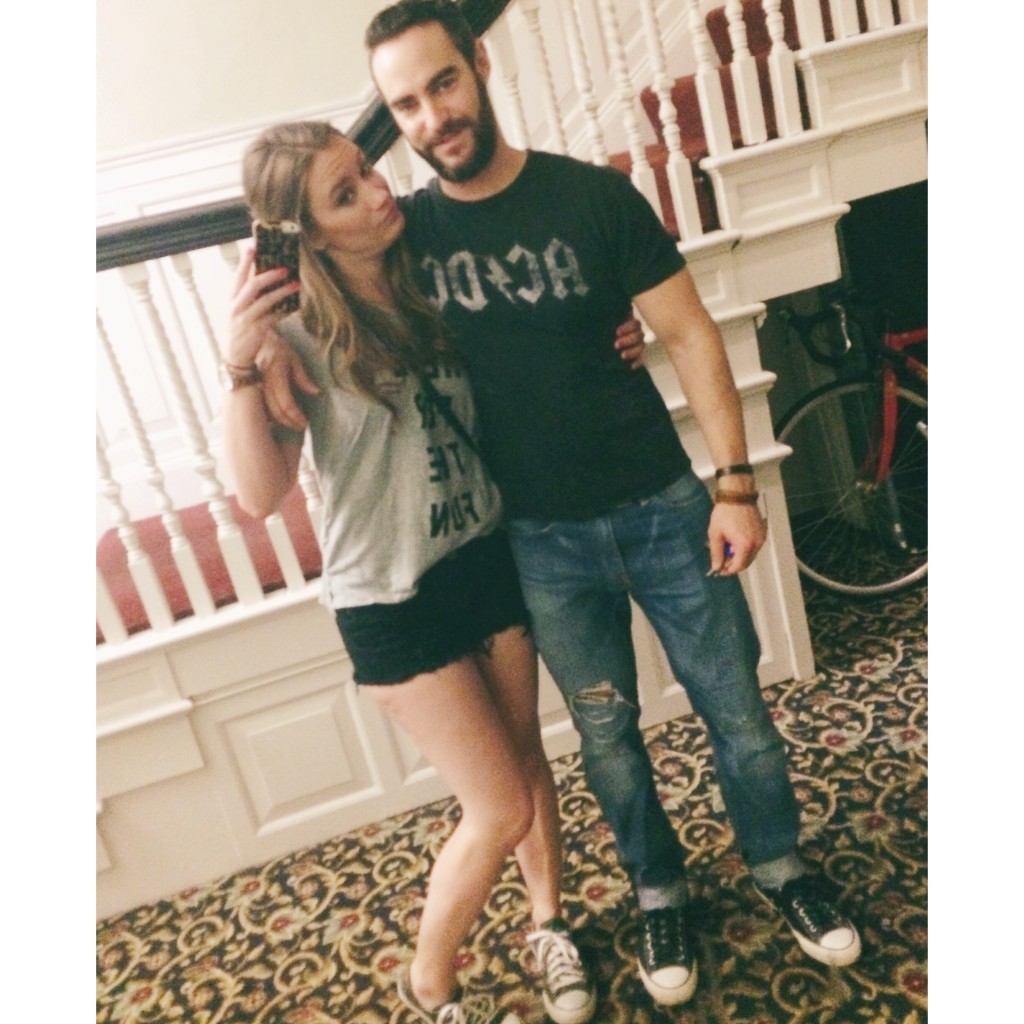 Another indoor concert, we headed to the TD Garden in Boston to see the Imagine Dragons Smoke and Mirrors Tour. Imagine Dragons is one of those bands whose music you hear but never know who sings it. I found myself singing along to songs that I didn’t even know I knew. 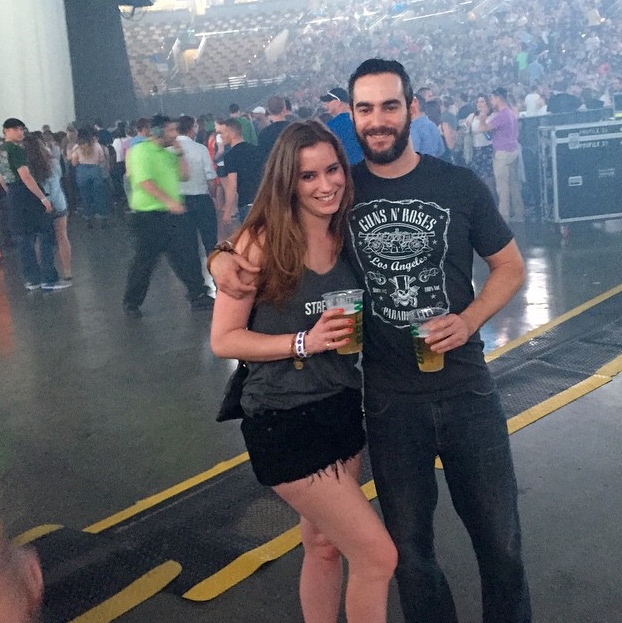 We had floor tickets at the Garden which were amazing! It’s a great experience to be so close to the stage at a show, especially in such a large venue.

Outside the Box – Kasey Musgraves & Guster

Outside the Box Boston is a free 6 day summer arts festival on the Boston Common. Ted Cutler, the philanthropic visionary behind the event teamed up with local sponsors to put on the shows. If you don’t live in a city where some rich guy wants you to enjoy the arts outside in the summer, you should move to Boston because this event is awesome!

I had heard of Outside the Box last year but was unable to attend any events. I had almost forgotten about it when I saw Instagram posts about Kacey Musgraves on a Friday night. Within 10 minutes, I was out the door, boyfriend and picnic blanket in tow. We met up with friends to watch the show sponsored by Country 201.5, the only country station in Boston. Kacey Musgraves played a great set, including my beloved “Mama’s Broken Heart”. 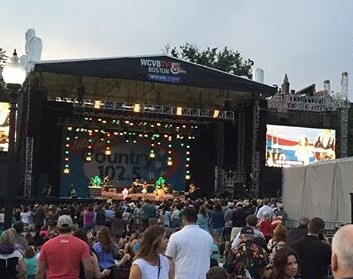 Guster, a Boston-born jam band of the 90s and early 2000s, also played as part of Outside the Box. A fan since high school, I jumped at the chance to see them live. I planned a double date picnic with my friend and her then-fiancé-now-husband and we enjoyed a night of Upper Crust Pizza and music. It was a surreal experience for me to be time-traveled back to high school in Pennsylvania while sitting in a park in Boston.  As usual, we had an awesome time being weird while people pretended not to know us. 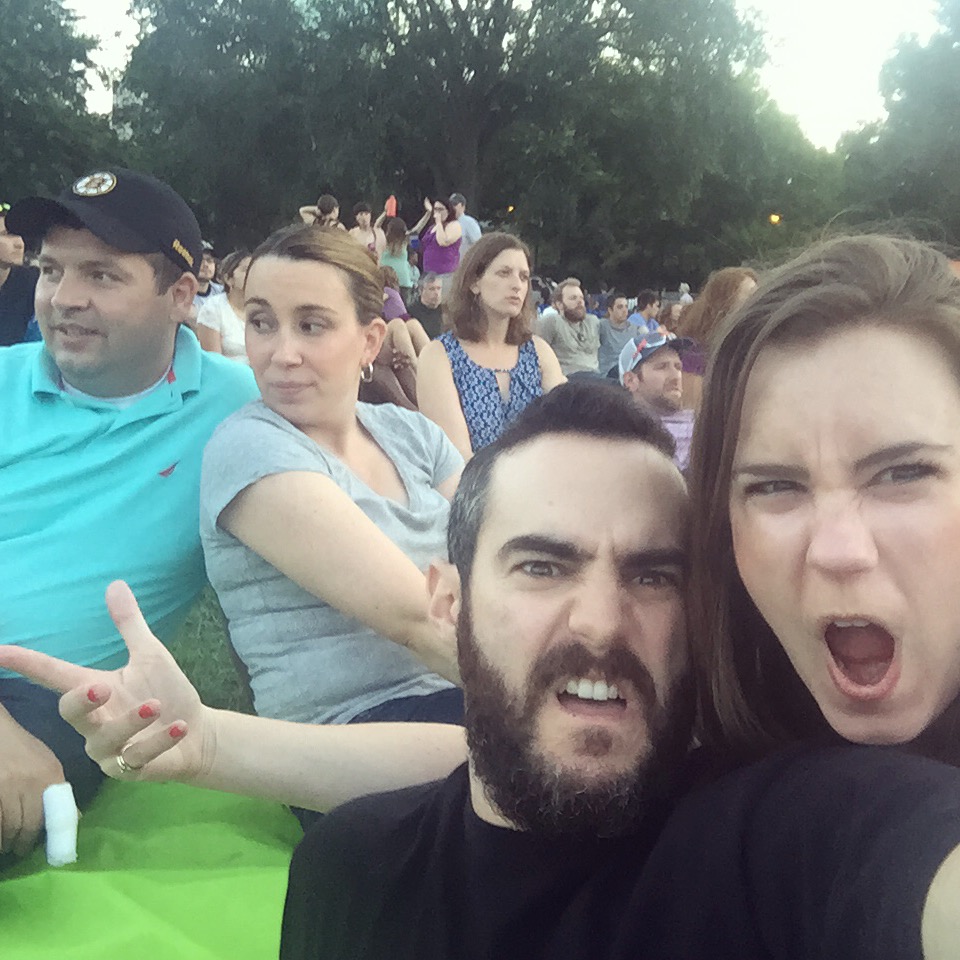 If you weren’t able to check out Outside the Box the past two years, put a calendar reminder in for July 2016 so that you don’t miss it next summer.

Keeping with the momentum of outdoor events, my boyfriend snagged last minute tickets to see Darius Rucker’s Southern Style Tour at the Xfinity Center in Mansfield, MA. Darius Rucker was the perfect first country concert experience for him…Kacey Musgraves in a park and a rained-out street party didn’t really count. 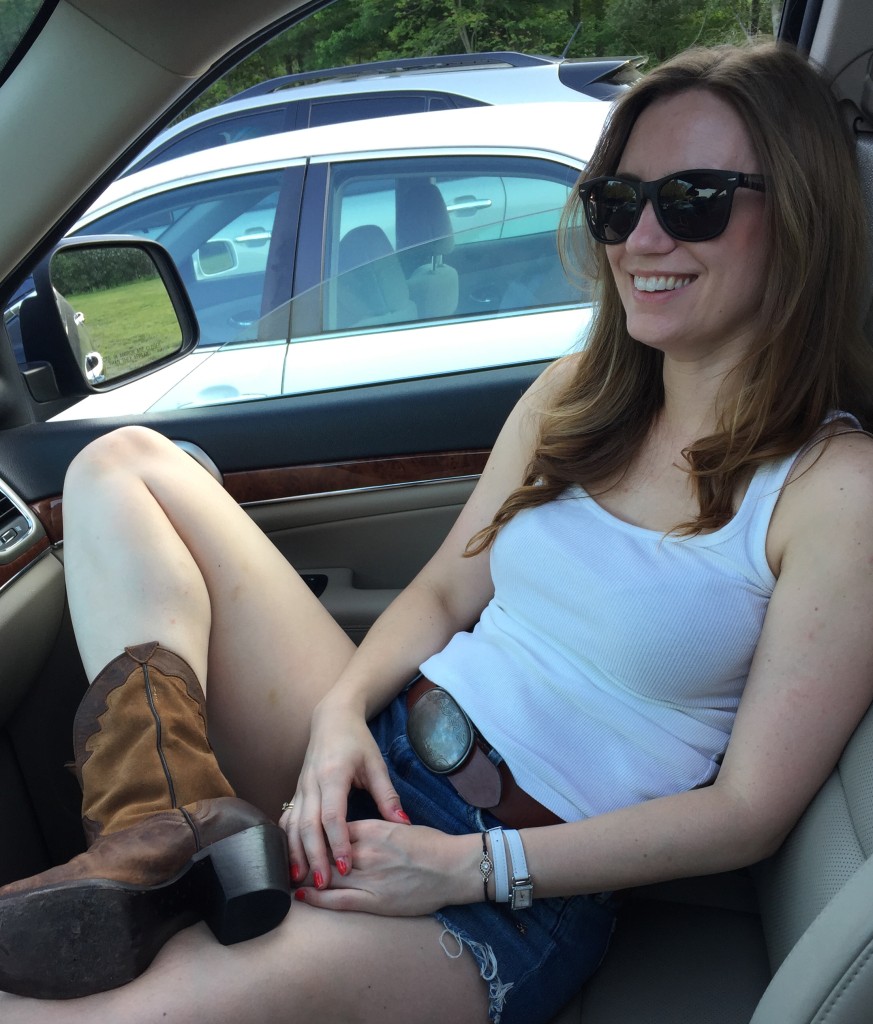 New England country lovers came out of the woodwork for the concert.  There were cowboy hats and girls in boots and songs about homegrown love. Darius played some of his famous Hootie and the Blowfish songs from the 90s that we sang and danced along to before realizing that having attended high school in the 90s, we were part of the oldest cohort of concert attendees and left early to beat the traffic to go home and sip tea.

Flipping the switch, we found ourselves to be some of the youngest hippies at the Australian Pink Floyd Show at the Blue Hills Bank Pavilion in Boston in August. I had never been to a Pink Floyd anything and this cover band was certainly an experience. We had floor seats at the outdoor venue which put us inside of the light show action. 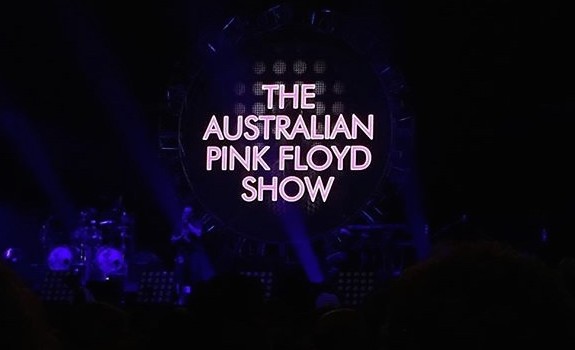 I took the opportunity to indulge on stadium nachos covered in cheese and chili which, if I have to make a ruling, is the best way to enjoy a concert.

Rounding up the second to last of our summer concerts was Country Crows and Citizen Cope also at the Blue Hills Bank Pavilion. For concert outfit consistency, we attended the 90s throwback concert in our grungiest baggy pants. Feeling the need to outdo our previous concert outfits, we pulled out all the stops—I rocked a belly shirt and choker, my ringer tee-clad boyfriend pushed a hoop earring through his cartilage piercing, and we took pictures to send to our pearl-clutching moms.

We probably looked like fools to the normally dressed people at the show, but we were loving every moment of reliving the 90s and dancing to songs that we hadn’t heard in years.

We’ve got one more concert to wrap up the season. Look for a post on Little Big Town after tonight’s show!