This weekend I went on an unofficial Boston Beer Tour.  By unofficial, I mean, it was not affiliated with any touring company, however, it was totally official to me.  It also hit about 75% of the stops on actual beer tours.  If I had a creepy white van I could totally have a second job driving people around to the top beer spots because I’m no doubt a lot funnier than whomever is currently running the tours *.
* I have no idea if this is true, but let’s be honest, it probably is
I did what most people do at 8:30 on a Saturday morning and set my alarm to wake my ass up so that I could get a fresh start with my friends.  We were intent on getting to the Sam Adams Brewery in Jamaica Plain early.  I heard that the brewery tickets are limited (I read it on the internet so it must be true).  They’re free and unless you get there before 11 for tickets, you have a snowball’s chance in hell of getting a tour and free beer samples.
Naturally, I woke up before my alarm and screwed around on the internet tweeting Sam Adams and doing other important things and found myself running late.  Whoever didn’t diagnose me with exercise-induced asthma should have their medical license taken away because I literally tasted blood from running…and my legs hurt.  In fact, I think it might just be an allergic reaction to exercise.
When we finally arrived at the Sam Adams Brewery we got tickets for the 10:45am tour because another member of the group was running late.  None of us had eaten so we took the suggestion of a strapping young chap at the brewery and headed to Ula Cafe across the street, housed in an old brewery building (according to the two brewery signs on it). 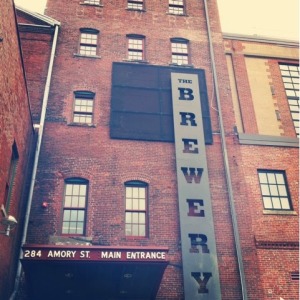 Feeling slightly overdressed after having showered earlier in the morning, we joined the neighborhood hippies for some amazing biscuit egg sandwiches while we waited for the rest of the group to arrive. 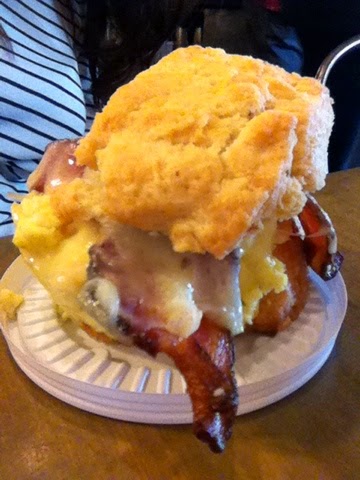 After stuffing ourselves we moved on to the Sam Adams Brewery where I made the strapping young chap who gave us the breakfast recommendation take pictures of me and my friends on the beer barrels.  For the sake of not destroying the reputations of friends, I’m posting a shot of just me, convincing people that I’m flexible in jeans on a beer barrel.

The tour was great and our guide Andy was super knowledgable.  We learned about IBU, or International Bitterness Units, of beer and the 4 steps of tasting: Color, Clarity, Smell, and Taste.  We tried 4 different beers and then bought some more in the gift shop to lug around.
After the tour we hopped on the complimentary party trolley to Doyle’s, a Jamaica Plain drinking establishment since 1882.  Our trolley driver has been driving for over 7 years, every Saturday, and gave us quite a trip.  We took our brewery tour tickets and cashed them in for take home pint glasses.  My friends and I drank the Marathon 26.2 limited edition brew that’s brewed in honor of the Boston Marathon and rumored to have electrolytes in it. 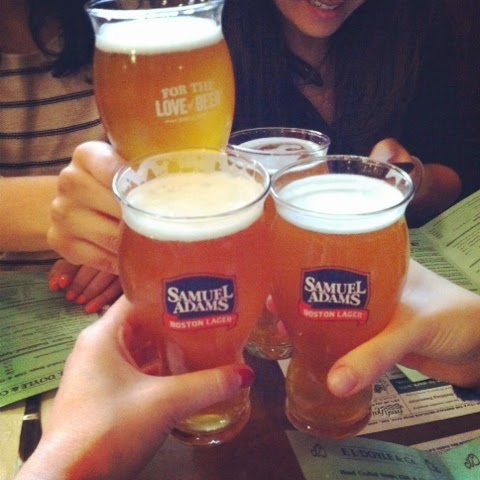 After Doyle’s, we headed to Back Bay, my neighborhood, so that I could drop off the growler of beer that I bought for super cheap at the brewery.  From there I took the group to Parish Cafe, my local watering hole and where I completed my Mug Club.  Parish has awesome limited edition drafts and a huge bottle selection.
After Parish we continued on the beer tour of Boston by stopping at Boston Beer Works. Admittedly not the best brewery by any stretch of the imagination, it was a good stop.  I liked being able to order a sampler of beers.  The Blue Thunder was by far the most interesting and probably the most tasty after the Imperial Stout. 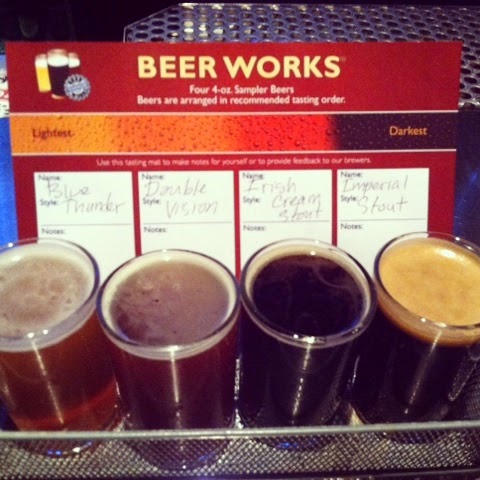 Unfortunately there wasn’t enough time for Harpoon and since I’ve been there several times, we ended the day there.  I left about 8:30 which made this a 12 hour Boston Beer Tour!